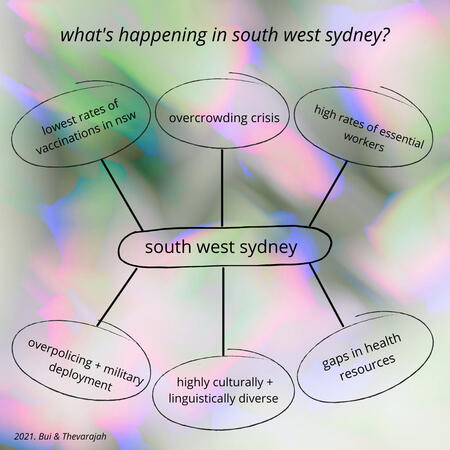 What's Going On In Western Sydney?

Already economically disenfranchised and disproportionately affected by the first wave of COVID, today, South West Sydney as a whole has the highest rates of COVID and lowest rates of vaccinations

"Overcrowding is a big problem in Fairfield. There is a shortage of affordable accommodation, there may be 2 families living within the same house. So when we have heard that large families are contracting the virus, some of these cases are linked to overcrowding. ” explains Juana Reinoso, CEO of CORE Community Services, an organisation working with the local migrant and refugee population in Fairfield City

Despite daily emphasis by governments that essential workplaces are critical sites for the transmission of COVID-19, there has been little action to support and protect essential workers

Out west, the Smithfield-Wetherill Park Industrial Estate is one of the largest industrial areas in the Southern Hemisphere - a region where high numbers of community transmissions are reported.
A report looking at the emergency state of essential workers in NSW revealed:
Only 55% of respondents said their employer has put in place regular extra cleaning of the workplace.Almost half (48%) believe they have been put at risk of Covid-19 transmission in their workplace.only 39% said that social distancing is being consistently applied at work; and fewer than 35% reported that either roster changes or staggered lunch breaks had been introduced to help with this

More than half of Western Sydney’s population was born outside of Australia, and majority of households speak a language other than English at home. The diversity of our community makes critical the need to build accessible, culturally appropriate health services

In Fairfield alone, 78% of residents have parents who were born overseas and more than 75% speak a language other than English at home. In Canterbury-Bankstown, just 34.1% of people speak only English at home and in Liverpool, just 31.1% of residents are born in Australia

Figures indicate that police officers have been handing out more than twice as many Covid fines to western Sydney residents, than those in other suburbs - even before the crackdown in the city’s west and southwest started.
Contingent of up to 300 ADF troops have been deployed to enforce rules in eight western and southwestern Sydney council areas

South-west Sydney hospitals are historically underfunded, and even amidst this COVID crisis, no additional help has been announced. Long before COVID, parliament alongside experts have combed through evidence to examine the state of hospitals out in Western Sydney. A single finding was made: "Health and hospital services in south-west Sydney have experienced historic underfunding from successive governments."

Hospitals across Western Sydney have reported they are critically understaffed, with COVID-positive patients reportedly queueing for hours in ambulances for admission.

This resource is being regularly updated, please contact the email below for more details or to request an adding of organisation